Case Study
What is the best way to produce a 7-axis articulated robot in-house?

Machinery Parts Manufacturer Company A (2,000 Employees)
Problem
Solution and Results
Japan is one of the world's leading producers of industrial robots, and has been promoting automation and efficiency by introducing robots mainly in the automobile and semiconductor manufacturing industries. In other industries, however, the use of robots is limited and still leaves room for its widespread use.

Company A, a machine parts manufacturer, had been working to save labor and improve efficiency by introducing robots to their factories in Japan and overseas, but had been facing difficulties in achieving success. Mr. B, head of the company's Production Engineering Department, explains.
"We had introduced commercially available robots because it was too costly to outsource the development of robots, but we could not optimize them to our production line as the arm lengths and detailed movements did not properly suit our needs. After all, many processes relied on manual operations. We have overseas factories as well, but overseas labor costs were also rising. It was imperative to develop a robot tailored to our own production line to control labor costs."

Through trial and error, Mr. B decided to build the optimal robot in-house for their production line, but was unable to easily put his plan into action.
"To realize delicate operations and processes that have been performed manually solely with robots, we concluded that it would be ideal to manufacture in-house a 7-axis articulated robot that has more joints than an ordinary robot. 7-axis articulated robots have the advantage of achieving more human-like movements than general six-axis articulated robots. Unfortunately, however, the company lacked the technology and know-how to develop such a robot. We also faced a problem of finding a controller that could control up to 7 axes. Nevertheless, we definitely wanted to succeed in the in-house production of robots to accumulate technologies for the future," he said. Mr. B did not give up and continued to gather information on in-house robot production.

Mr. B decided to consult a SANYO DENKI sales representative with whom he had previously worked on another project concerning cooling fan. The SANYO DENKI representative listened carefully to his problems, and proposed a SANMOTION C S500 series motion controller, which can control a 7-axis articulated robot.
"When we heard that the program can be created in a short time without complicated input because the motion models of Cartesian robot, parallel link robot, and SCARA robot are pre-defined, we had high expectations that we could realize in-house production with this system," said Mr. B.

This motion controller can control 15 robot configurations. Functions such as trajectory control and interpolated operation can be done with ease. 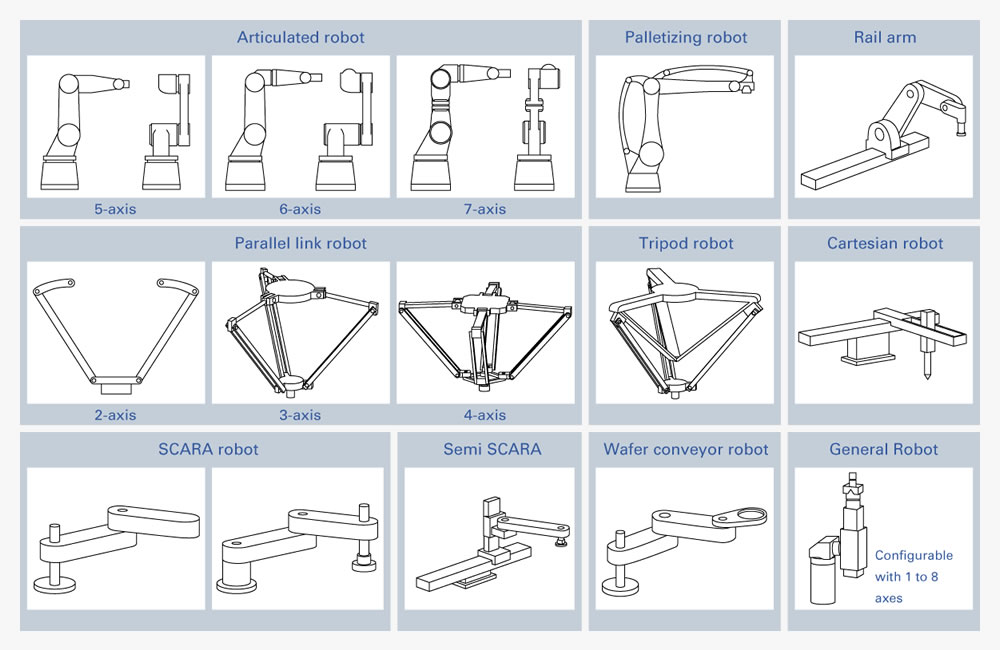 After several presentations and technical explanations accompanied by the engineers, Company A officially decided to use the SANMOTION C and Mr. B and his team started manufacturing the robot using SANYO DENKI's servo system.
They say that behind this smooth decision was the trust in SANYO DENKI's technical support system.

With the technical support of SANYO DENKI, the development of the robot proceeded smoothly.
"At first, we were worried as we did not have any in-house know-how, but SANYO DENKI provided generous support through the design of the joint axis, and this was extremely helpful. We successfully completed the robot and were able to perfectly fit the length and movement of the arm to our own production line."

Company A integrated the newly completed robots into their production lines and were able to achieve labor-savings and improve efficiency, just as they had expected. Mr. B says that bringing the robots in-house has been significant in terms of efficiency as well as the accumulation of technology and know-how.
"Now that our production engineers have acquired the skills, they can apply the servo system to other applications and consider further labor-savings and efficiency gains. As a side note, a customer who visited our factory the other day complimented us on our technological capability to manufacture the robots in-house. I felt that this is what it means to be an engineer," he said with a smile. Mr. B's challenge has brought about a variety of secondary effects.

Motor / Driver
What is the best way to produce a 7-axis articulated robot in-house?
A motion controller SANMOTION C contributing to the in-house robot motion planning

Motor / Driver
The rapid growth of biochemical analysis requires increased speed in analyzing specimens
What is the 2-phase stepping motor that contributes to higher speed and lower noise of the analyzer?

Motor / Driver
A long-used servo motor was discontinued, and it was hard to find an alternate...
Equipment retrofitted with custom products