Training
The Basics of Power Failures and Their Solutions

Session 1 - How Electricity is Transmitted

Training  The Basics of Power Failures and Their Solutions

In this session, we introduce the electrical systems we rely on every day, the types of power outages, and how we can handle them.
Now more than ever, electricity is an indispensable part of our society. The widespread destruction of disasters like the Great East Japan Earthquake of 2011 reminds us of the importance of electricity. When everything from refrigerators to production lines suddenly came to a halt, we felt a renewed appreciation for the electricity that we had taken for granted.

In recent years, the popularity of hybrid electric vehicles and fully electric vehicles has risen rapidly. But what will happen when a blackout occurs in this era where everything from our transportation infrastructure, computers and smartphones, street lighting, and kitchens rely on electricity? This session introduces the fundamentals of the electric power system and some basic knowledge about power outages and measures to cope with them. First, let's look at how electricity works.

Generally speaking, electricity is generated at power plants operated by power companies. Electricity from a power plant passes through the power lines of transmission towers, also called pylons, then the voltage is decreased, or stepped-down, at transformer substations before being used to power factories and our homes.
The transmission lines that transmit electricity are usually in the form of overhead power lines. The standard and most common structure is the double circuit transmission line which is characterized by having two independent circuits aligned vertically on either side of the structure with each circuit made up of three sets of lines for a total of six transmission lines.

As the figure illustrates, double circuit transmission lines have an equal number of lines on each side. Rather than sending a “different” kind of electricity, each side sends the “same” electricity. There is a simple reason for this: reliability.
This mechanism enables one side to continue sending power even if an accident occurs where transmission is impossible due to damage caused by a natural disaster, a bird or other wildlife, or by human error. In other words, using two circuits to transmit power increases reliability with aim of preventing prolonged, wide-scale power outages.
Also if you look carefully, you can see that there is an electric wire at in the highest part of the tower. This electric wire is called an optical ground wire, and it is not for conveying electricity, but it serves as an arrester to attract lightning. It minimizes the likelihood of direct lightning strikes to the transmission lines. 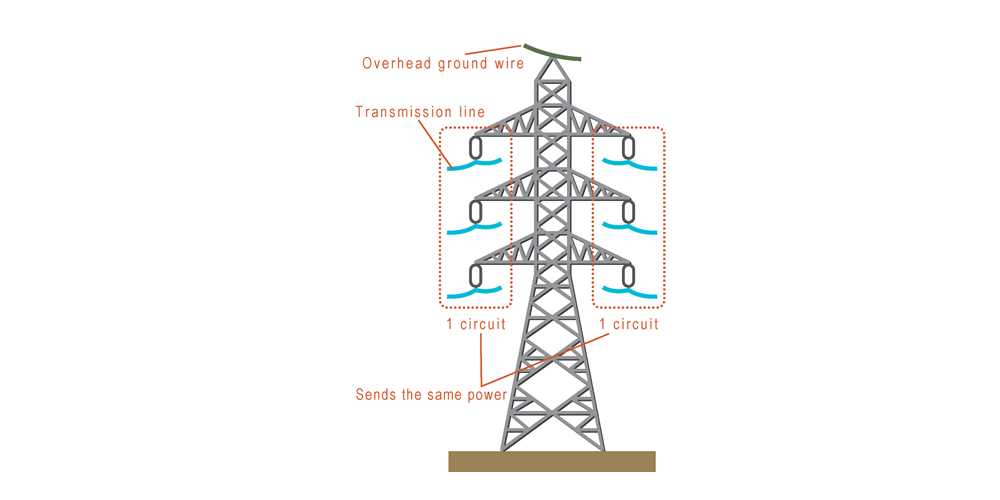 Electric utilities make various efforts to increase the reliability of power transmission, but still, power outages occur. In the next session, we’ll introduce some types of power outages—some of which may surprise you!

UPS / Renewable Energy Inverter
Does your generator take too long to start after a power failure?
What kind of power solution can provide uninterrupted long-term power backup?

UPS / Renewable Energy Inverter
Need to provide backup power in a plant but want to keep installation costs down?
How do you protect equipment from instantaneous voltage dips while reducing UPS capacity?