The fans we encounter in our daily lives differ according to the application in which they are used. SANYO DENKI has a lineup featuring many types of fans. Let's take a quick look at how they differ.

Let’s start with the differences in fan drive power. There are AC fans that are powered by an alternating current (AC) power supply from an electrical outlet, and DC fans that are powered by a direct current (DC) power supply. Rotational speed of AC fans is fixed by the frequency of the AC power supply, whereas that of DC fans can be changed using the motor and the circuit.
Currently, DC fans, which are easier to control and available in many varieties, are the mainstream product. There are also ACDC Fans that have a mechanism to convert AC to DC power which work the same way as a DC fan while using AC power.

Axial fans are the most commonly used type.
Axial fans have an impeller mounted in the center of the frame that draws in air and expels it straight in the direction of the axis of rotation. This is probably what you think of when you hear the word fan. Axial fans can often be found in our daily lives and feature high airflow and low noise.
Axial fans include Counter Rotating Fans, in which the blades of two axial fans are combined in series and rotate in opposite directions to improve the straightness of the airflow and provide high static pressure, Endurance Fans, which can be used in extreme conditions such as extremely hot or cold environments, and Reversible Flow Fans, in which the direction of the blades' rotation can be reversed to achieve airflow in both directions. All of these can be selected to meet the needs of your application.

Unlike axial fans, Blowers and Centrifugal Fans draw in air from the intake side and discharge it after changing the airflow direction by 90 degrees.
Blowers and Centrifugal Fans are ideal for applications where there isn't enough space for air to be expelled from the device in a straight direction. Because of their high static pressure performance, Blowers are ideal for localized cooling applications where air is blown in a pinpoint manner and for internal cooling of devices with a high density of mounted components. In the same way, Centrifugal Fans are suitable for exhausting air from the interior of equipment with high mounting densities. We will look at the features of each fan type in later sessions. 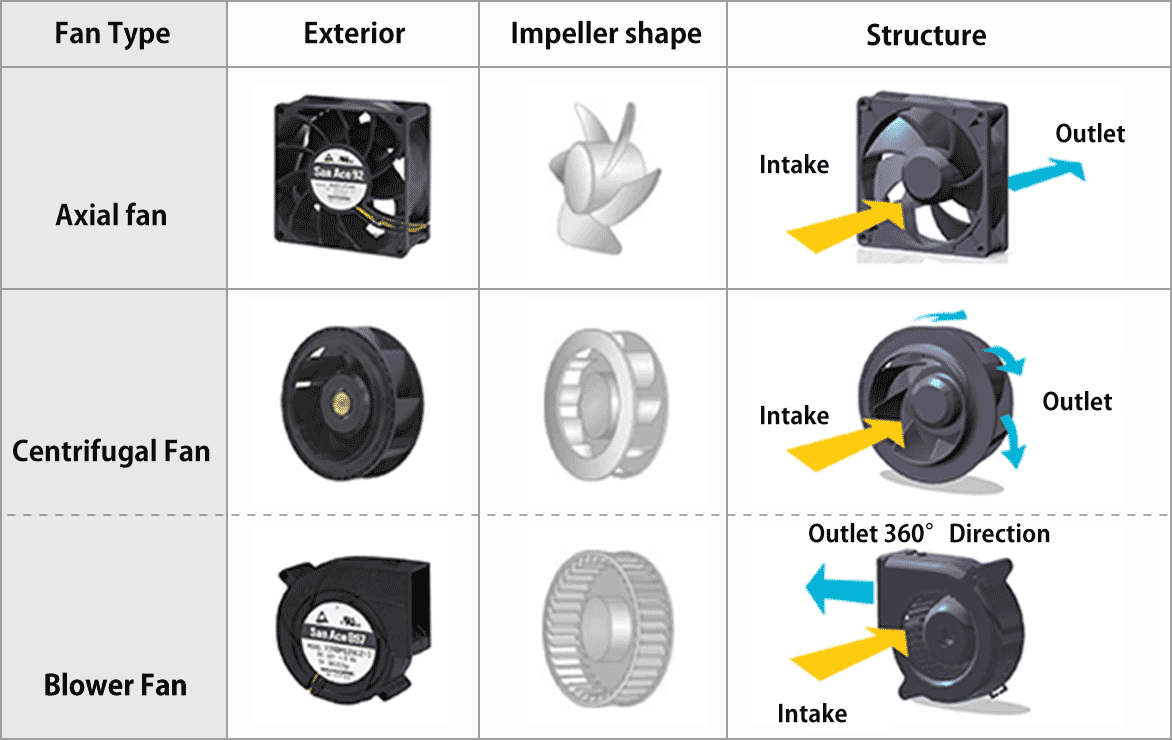