In previous sessions we looked at fan characteristics. In this seventh session we will examine system impedance in devices where fans are mounted.
The electrical resistance (Ω) of a device is the criterion for determining its power capacity (A). Based on the same principle, the system impedance of a device is the criterion used for selecting a fan.

By knowing the point where the "system impedance" of a device and the "P-Q performance" of a fan intersect, you can determine whether the fan is suitable for the device. This intersection is called the "operating point," and the airflow at the operating point is called a fan's "operating airflow."

Although system impedance can be calculated from a formula, when doing so it will be necessary to measure the operating airflow, so a measuring device will still be required. Usually, multi-nozzle double chamber measuring devices are used to evaluate the characteristics of fans with high accuracy.
This measurement method converts the pressure differential generated in chambers A and B of the figure into the air velocity of the nozzles cross-section, and multiplies this air velocity by the cross-sectional area of the nozzle to obtain the airflow. By selecting nozzles with different openings according to the airflow range of the object being measured, accurate measurement is possible for a wide range of airflow. 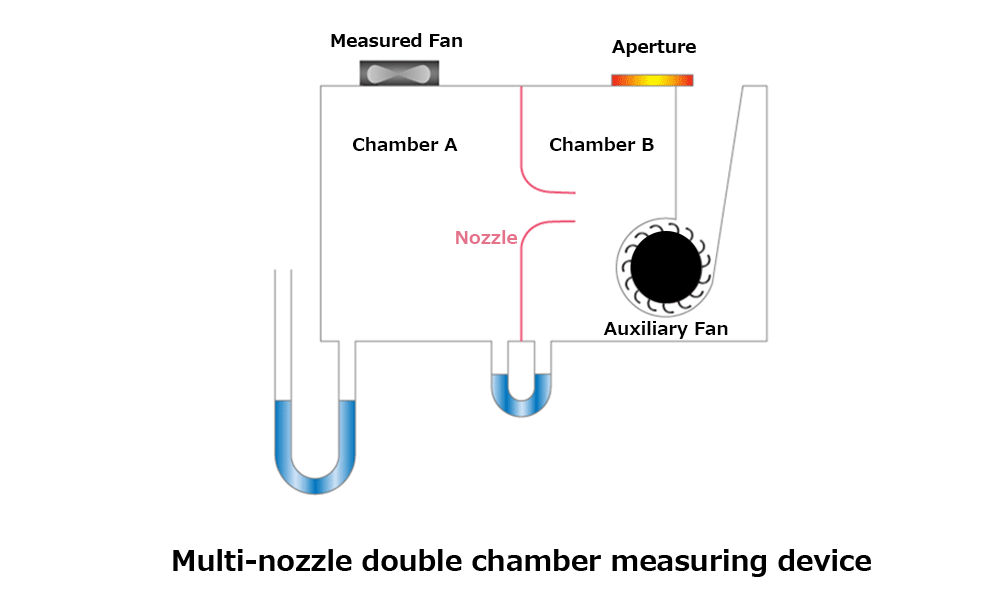 However, there is also a portable measuring device. That is the SANYO DENKI "Airflow Tester." Since it uses the same multi-nozzle double chamber measurement method, it can easily measure system impedance and operating airflow with high precision. By measuring system impedance with this Airflow Tester, one can efficiently design housings that take measures against heat into account.