In the previous session, we explained the features and characteristics of axial fans. In this session, we'll look at blower fans.

Blowers have a structure similar to that of Centrifugal Fans. Like Centrifugal Fans, Blowers have an impeller that draws in air axially and discharges it sideways, changing the direction by 90°. The main difference between them is that the Blower has a snail-shaped housing that encloses the impeller, on which a discharge opening is located. The impeller rotates and blows air radially, then the air is guided through inside the housing and discharged from the discharge opening. 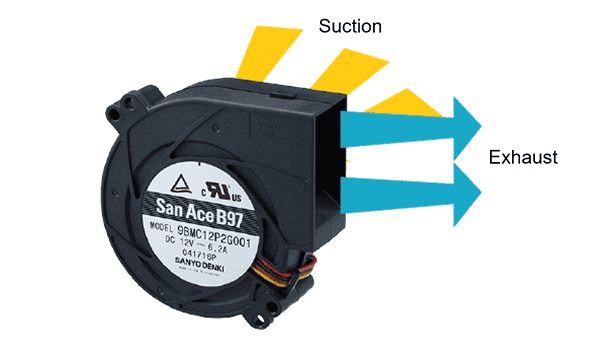 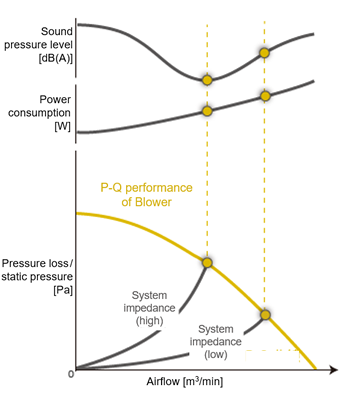 As shown in Fig. 2, like Centrifugal Fans, the P-Q performance curve of Blowers has no stall region, and the shape of the curve is also similar to that of Centrifugal Fans. The power consumption of Blowers, unlike Axial Fans and Centrifugal Fans, does not simply depend on the airflow performance. However, it can be said that Blowers tend to consume less power when the Blower's airflow is low and static pressure is high. Therefore, Blowers generally consume the most power when the airflow is equal to the maximum airflow. It can also be said that the noise level is the lowest in the middle of the P-Q performance curve.

Since Blowers do not have a stall region in the P-Q performance curve, the operating range against the system impedance curve is wider than other fans. Regarding the noise level, the sound pressure level of Blowers becomes the lowest around the center of the P-Q performance curve, so Blowers need to be operated around this area to reduce noise.
Also, Blowers feature particularly high static pressure among other fans. Therefore, they are suitable for use in densely-packed equipment with high system impedance. In addition, as Blowers discharge concentrated air from one opening, they are also suitable for spot cooling applications where the air is blown directly to targets.