So far, we have learned about the points to note when selecting fans. In this eighth session, and in those that follow, we will look at the features of each fan type. Let's start with axis fans, the most common type of fan.

Axial fans have a motor mounted in the hub centered in the housing that supports the entire fan, to which fan blades are attached radially. Depending on the model the blades rotate clockwise or counter-clockwise. Figure 1 illustrates an axial fan drawing in air from one side and discharging it from the opposite. Axial fans are so named because the air flows in the direction of the fan's rotational axis. 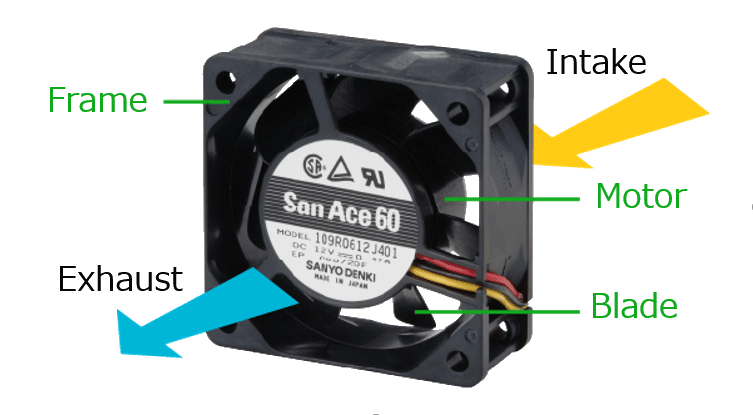 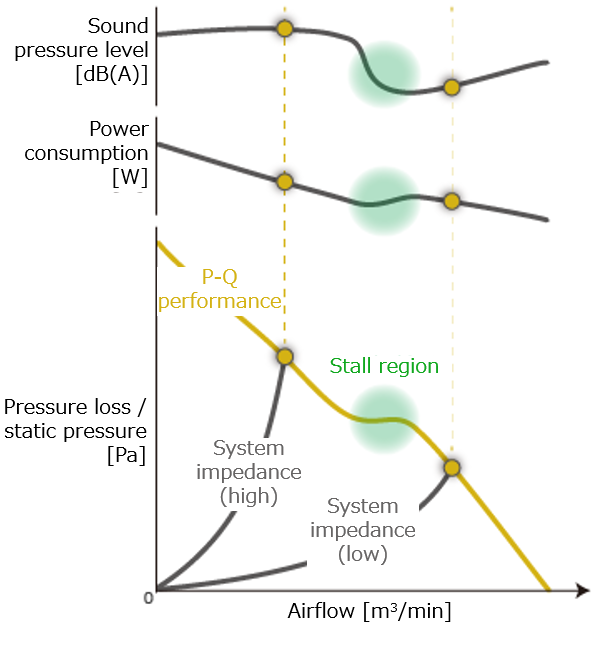 The airflow vs. static pressure characteristics (P-Q performance curve) of axial fans look like the yellow line in Figure 2. As the airflow increases, the static pressure decreases, demonstrating an inversely proportional correlation. It should be noted that axial fans have "rotating stall regions" in their performance curves where the curve behavior changes rapidly.

Rotating stall regions are where fans experience a drop in speed performance. When operating with high static pressure in ranges to the right of the stall region, the air around the fan flows smoothly along the surface of the blades, but as the static pressure increases, the air starts to peel away from the surface of the blades. In this state, the fan is "operating in stall."

In the stall region, the air flow around the fan becomes unstable, repeating the cycle of flowing near and away from the blades. Operating in this region also significantly and negatively affects the fan's power consumption and sound pressure levels.

Axial fans are available in many variations and features such as high airflow, high static pressure, and low noise. They are suitable for various applications including air blowing, ventilation, and spot cooling.
When selecting an axial fan for use in a device, please make use of this session and choose the best fan whose operating point lies to the right of the fan's stall region so that you can enjoy optimized low power consumption and noise level.